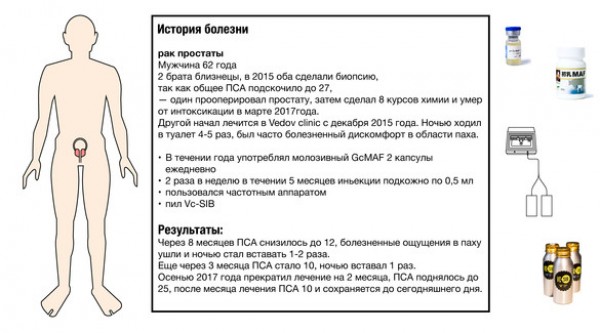 2 twin brothers, in 2015 the biopsy was taken for both of them because the total PSA jumped to 27.
One of the brothers was operated on the prostate, then he came through 8 courses of chemotherapy and died because of intoxication in March 2017.
Another brother started treatment in Vedov clinic since December 2015.
He went to the toilet 4-5 times a night and often felt a painful discomfort in the groin area.

After 8 months of such treatment PSA decreased to 12, the pain in the groin disappeared  and at night he got up 1-2 times.

In the fall of 2017 he stopped treatment for 2 months, PSA rose to 25, after a month of treatment PSA was 10  and is the same until today.